Getting meaningful results from a quantum computer requires what can only be described as a little magic.

Traditional computers – from your desktop PC to the supercomputers that IBM builds when it’s showing off – all use a system of switches that can be either on or off. We represent this binary state with a 1 or a 0.

Quantum computers are different in that they can be in both of these states at the same time. These states are called ‘superpositions’.

The basic unit of a quantum computer is a quantum bit or ‘qubit’, and their ability to be in two simultaneous states is what makes quantum computers so fast. Sound more like magic than science? Read on, and you’ll discover that despite all the arcane physics, a working practical quantum computer could be just around the corner.

The past, present and future of AI

Interest in quantum theory and its application to computation is partly a result of work carried out by the mathematician Peter Shor. He developed an algorithm that could factor large numbers using a quantum computer.

The possible speed of this algorithm shows the potential of the technology. Shor’s algorithm is so powerful that it holds the promise of cracking the supposedly watertight encryption you and I use when doing internet banking, something that no conventional computer has come close to. 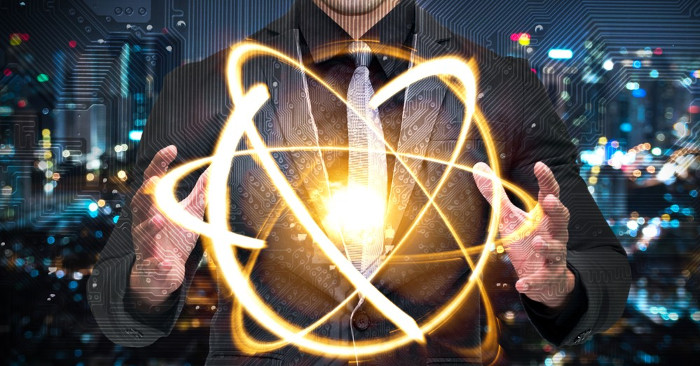 ALREADY SLOW: The IBM Blue Gene supercomputer is as powerful as a ZX81 next to a quantum computer

A 30-qubit quantum computer would have around the same processing power as a conventional computer processing commands at 10 teraflops per second. By way of contrast, current desktop computers operate at mere gigaflops-per-second speeds.

This sounds great, so why aren’t we all using them? The answer is that, at present, a working quantum computer capable of solving real-world problems is still firmly on the drawing board. To see why producing a proper machine is so hard, we need to go back to basics.

When the computer works on a problem that you’ve given it, the calculations are performed within this parallel universe until an answer is presented. But it doesn’t stop there. You can’t just see the answer when the calculation is complete. In fact, you can’t see the answer at all until you actually go looking for it. And when you do look for it, you could disturb the state the quantum computer is in and end up getting a corrupted result.

All the parallel calculations that the quantum computer is doing don’t actually collapse down to a final answer until you consciously try to observe it. In some ways, then, it’s not the answer itself that’s important, but how you get hold of it. It’s this observational component of the quantum computer that forms the biggest obstacle to actually building one.

Physicists refer to this problem as ‘entanglement’, what Einstein called “spooky action at a distance”. Entanglement is, in essence, the result of observing how one qubit behaves based on the state of another qubit.

What causes headaches is that as soon as you look at one qubit, you change its state and the entire system collapses back into being a standard digital computer. This is known as ‘decoherence’, and is what makes the observations or results you’re looking at inaccurate or misleading.

For these complex reasons and many others, actually building a working quantum computer that can solve real-world problems is far from easy.

Despite the difficulties, however, there has been progress in several areas of quantum computing. As the state of a qubit is, in effect, outside of the physical universe, the quantum computer can move away from classical computer designs using transistors connected by microscopic wires.

Moore’s Law has so far delivered massive growth in computer processing power as transistors and the connections between then become smaller with each passing year. However, things are starting to change, and solid-state quantum computers look set to bridge the gap between traditional transistor based computers and their quantum cousins.

In a quantum computer, the computations are carried out by an exchange of information between individual qubits. This exchange of information is achieved by teleportation. This doesn’t mean that a qubit, such as an atom or photon, is ‘dematerialised’ à la Star Trek, but that the properties of one qubit are transferred to another. This has been achieved at the University of Vienna and the Austrian Academy of Science.

An optical fibre was used to connect lab buildings that were situated apart from each other across the river Danube. The lab was able to teleport qubits of information using a technique called polarisation.

They succeeded in exploiting the entanglement phenomenon, which meant that two particles were tied together when in fact they’re physically separate – the spooky distance that Einstein talked about. The particles existed in a parallel universe where they were able to change their state.

As a result, they could exchange information, which is just what they would need to do in order to make meaningful calculations. So how far away are we from building working quantum computers?

Actually, we have already constructed some of these near-mythical machines, even though they’ve employed relatively few working qubits. The earliest example was built in 1998 by scientists working at MIT and the University of Waterloo. It only had three qubits, but it showed the world that quantum computers were not just a fairy tale that physicists told their children.

The following year saw IBM once again demonstrate a working quantum computer. This time the firm was able to use Shor’s algorithm. IBM used a seven-qubit quantum computer to find the factors of the number 15.

A more complex quantum computer was also built in 2006 by MIT and Waterloo, and in 2007 a company called D-Wave burst onto the market with what it claimed was the world’s first 16-qubit quantum machine.

RIDE D-WAVE: D-Wave Systems’ 16-qubit quantum computer is the subject of much debate

D-Wave has yet to prove that its system is a true quantum computer, but this year also saw a team at Yale build the first solid-state quantum processor. The two-qubit superconducting chip was able to perform some basic calculations.

The significance of this development by Yale’s scientists is that it shows that a quantum computer can be built using electronics not that dissimilar to the components found in your desktop PC.

Yale’s system used artificial atoms that could be placed in the superpositional state quantum computers require. Until this development, scientists could not get a qubit to last longer than a nanosecond. In comparison, the Yale qubit lasted microseconds. This is long enough to perform meaningful calculations.

Scientists working at the Universities of Manchester and Edinburgh have combined tiny magnets with molecular machines to create what could end up being the building blocks for future quantum computers. Professor David Leigh of the University of Edinburgh’s School of Chemistry said:

“This development brings super-fast, non-silicon-based computing a step closer. The magnetic molecules involved have potential to be used as qubits, and combining them with molecular machines enables them to move, which could be useful for building quantum computers. The major challenges we face now are to bring many of these qubits together to build a device that could perform calculations, and to discover how to communicate between them.”

Looking forward to that goal, one of the most promising developments in the field is quantum dots. These are nano-constructions made of semiconductor material. As such, we can use many of the techniques that we now use to build traditional computers to harness quantum dot technology.

It may be possible to manufacture quantum dots in much the same way as we currently manufacture microprocessors. If the technology were successful, we could build quantum computers with as many qubits as we need. As things stand it’s still too early to make complete logic gates from quantum dots, but the technology looks very promising indeed.

The supercomputers we have today look like abacuses when compared to the processing power that quantum computers promise. With so many different avenues being explored by scientists, the final working structure of the quantum computer has yet to be realised.

What recent work does show is that it’s a realistic ambition to build a commercial quantum computer over the next few years. When that power arrives, we’ll see a truly quantum shift in how we all manipulate information.